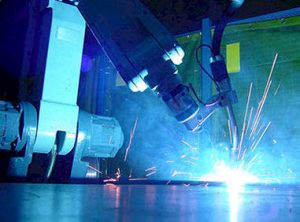 The contact tip is one of the smallest and relatively inexpensive components in any GMAW welding system; yet it can be the source of catastrophic failure that results in production downtime and increased costs.

In most cases, the economic loses due to tip failures surpass many times the acquisition cost of these parts. Therefore production-welding manufacturers are in continuous search for tips capable of outperforming expectations in increasingly stringent production conditions and expectations of through put.

The primary function of a contact tip is to consistently transfer welding current to the filler wire as it passes through its center bore and makes electrical contact with the bore surface. Not surprisingly, electrical conductivity is essential and proportionate to the high performance of Silver Alloy contact tips. 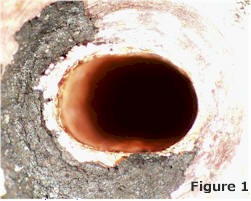 Contact tips may fail in a number of different ways and quite often the root cause of failure can be linked to external factors [Figure 1].

Both are failures that affect robotic and all welding manufacturers. Here, repeatability of the tool center point (TCP) is crucial to avoid costly robot re-programming.

One of the significant contributors of TCP error is known as “key-holing” (Figure 1); the continuous rubbing by the moving wire inside the tip bore at elevated temperatures eventually wears off the bore outlet. In sheet metal robotic welding applications, this may result in weld defects such as lack of fusion or burn-through.

Copper has been the material of choice for many decades, primarily because, after silver, it displays the second best electrical conductivity amongst all metals (Figure 2).

However, due to its face centered cube (f.c.c.) crystalline structure, pure copper is naturally ductile.

Fortunately, copper can be strengthened by a number of strengthening mechanisms including cold work, solid solution, precipitation hardening and dispersion strengthening.

The most popular and inexpensive copper alloy used in North America for contact tips is CDA C12200 (P deoxidized copper).

Precipitation hardening alloys such as C18100 (Cu-Cr-Zr), C18200 (Cu-Cr), C17510 (Cu-Be) have been common for high performing tips since generally they tend to have higher physical wear performance than C12200.

Unfortunately, as most strengthening mechanisms, precipitation-hardening compromises the electrical conductivity of copper. Plant experience with these alloys has been mixed; in some applications, they appear to work while in other applications there is not clear difference with C12200 copper. 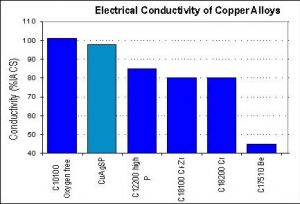 It is not all clear what are the exact microscopic mechanisms that produce wear in contact tips.

Some studies [Figure 3] have suggested that a relatively small region at the bore outlet sustains most of the wear.

At this region current densities and temperatures are high enough to promote electrical erosion [3,4], abrasion and oxidation phenomena, which accelerates wear.

Many of these phenomena are related to the effectiveness of the electron transfer from the tip bore to the moving wire.

Expanding on the standard silver-containing coppers, the composition of CuAgSP has been tuned to produce the most economical and highly conductive copper tip material available in the market today.

This alloy is being currently used to produce high endurance contact tips, which do not display arc instability or other electrical or thermal issues that are common to the precipitation-hardening coppers described above.

The superb performance appears to be related to both the low service temperature and electrical resistance combined with highly effective electrical conductivity and arc transfer both of which greatly reduce erosion, arc instability and poor arc starting characteristics.

All of our welding tips are made from the highest quality ISO Extruded Tubing.

For All Your Mig Welding Needs!

Many self proclaimed ORIGINAL manufacturers contract out a large percentage of their consumable manufacturing needs and just charge a higher price for their logo and packaging.  Some even go as far to make statements that the warranty is not valid if their Original brand consumables are not used. The WISE purchaser knows that these statements are false and misleading and are contravening to the MAGNUSON MOSS act in the USA and against the COMPETITION ACT in Canada.